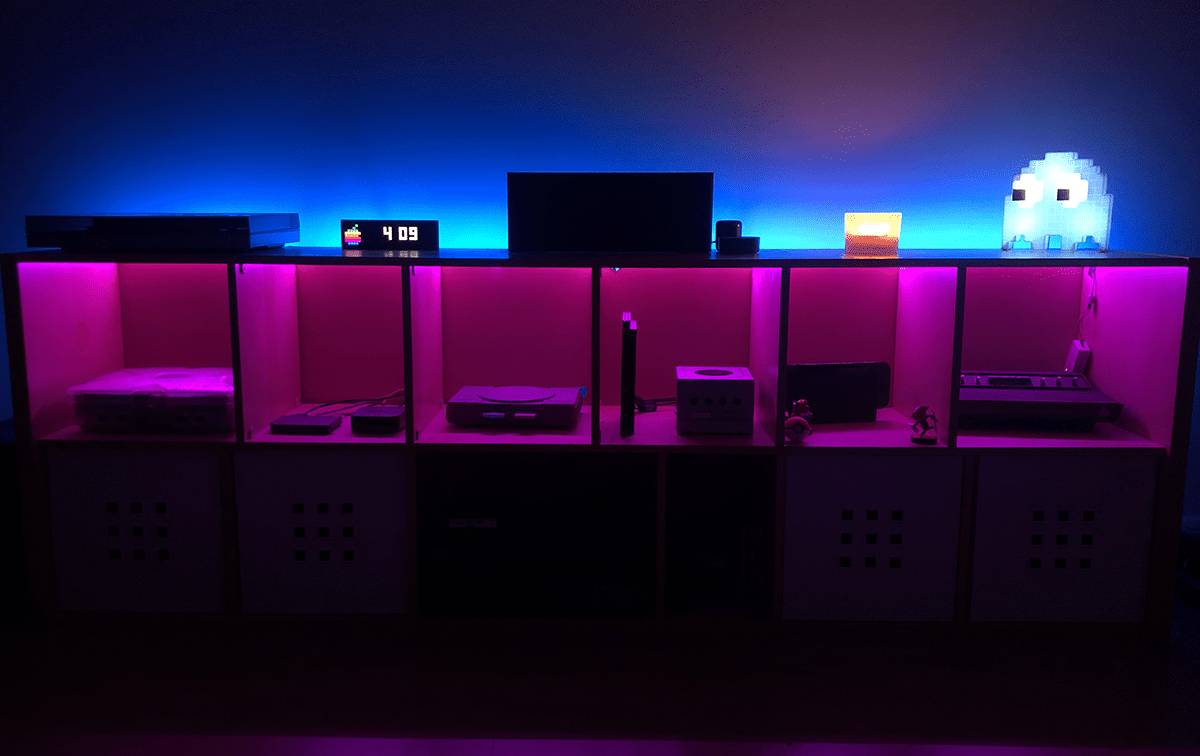 As previously mentioned the majority of the lighting in my house is Philips Hue. When it came to adding LEDs I was very much against the idea of spending £70 for two meters of Philips Hue tape. I knew there would be a better solution, one that would let me use generic LED tape. After researching I found the perfect solution, an LED controller that supported Zigbee.

Initially, I bought a few MagicHome controllers. These were rather inexpensive and already have a Homebridge plugin. While I was happy with the setup of these LEDs, the end result was rather janky. My Hue lights would come on, then about 2 seconds later the LEDs would follow. This wouldn’t do… While browsing Aliexpress I found some Zigbee controllers from Gledopto. I was sceptical about how well they would work but decided I’d order two, to see if they faired any better. After messing around with them, I’m sold!

When the controllers arrived I was very impressed. I like the fact that these controllers work with a DC jack or bare wires. Although, the unit doesn’t come with a power supply, I recommend using something above 2 amps, which is what I’m using. Gledopto has a range of different controllers, I went for the RGB+CCT controller as it gives a full range of colour and whites (CW/WW), like my Hue Lights. When buying be aware that some expose as two fixtures, one for colour and one for whites. For a full breakdown on the different types check out this reddit post. I bought my controller here, which appear as a single fixture.

When it came to ordering the LED tape for this I wasn’t sure which route I would go down, as I’ve already got a bunch of RGB LED tape. But, these RGB LEDs aren’t very good at replicating whites, hence why the controller has separate inputs for warm and cold white. I thought about ordering some CCT tape and using it with my existing RGB tape. Weighing this up I prefer the idea of a single strip of RGB+CCT tape, which I bought here. If you do want to use two separate strips, connect the positives together and wire the rest as expected.

When the RGB+CCT tape arrived it came with header pins. I didn’t want to waste a bunch of jumper cables so cut off the end and exposed the wires. If you ordered the same LEDs the wires inside are colour coded. To connect them to the controller hold a screwdriver in the hole and insert the stripped cable. Looking at the size of the pads, I’m not looking forward to soldering the next section of tape…

After wiring in the LEDs, you’ll want to connect the controller to the mains, when you do this the tape should illuminate. You can use any Zigbee Bridge such as the IKEA TRÅDFRI or Amazon Echo Plus to add the light. To connect it to the Philips Hue Bridge use the Add Light wizard in Light setup on the Settings tab. This new light will appear on the Hue app as Extended color light 1, you can then rename it and assign it to a room. I also spent some time adjusting the scenes so that in my living room they would appear as blue and pink.

If you only wanted Hue support then you can jump off at this point. But, due to Apple’s rules, these won’t appear in HomeKit… this looks like a job for Homebridge!

Exposing these controllers to HomeKit was simple. If you haven’t already got Homebridge setup, check out my previous post. When I started messing with Homebridge, I came across the homebridge-hue plugin but didn’t think I’d need it. Now that I’m trying to expose something from Hue to HomeKit I couldn’t live without it! To install this plugin type the below command:

Once installed you can then begin to configure the plugin. As you’ll only want to expose lights that Hue doesn’t expose to HomeKit the config will very concise. If you do need other parameters you can check out their configuration wiki here. To expose these lights add the below code to your config.json file—if you have other platforms, add this as an extra:

After this, you can save the config and startup Homebridge. When starting Homebridge it will kick out an error. Press the link button on the Hue Bridge and Homebridge will start up fully. The console will show a code and ask you to add it to the config.json file. If you’re using PuTTY to copy, highlight the user text. You’ll then want to delete the two users from the above config and replace them with the one you copied. To paste this move the text cursor to where you want to insert it and right-click.

Homebridge will now sync up to the Hue Bridge on startup. You will need to restart Homebridge when adding extra lights. This is so that Homebridge can discover them.

Overall, I’m extremely happy with the end result of this project. So far I’ve bought and setup two RGB+CCT Gledopto controllers, and have still spent less than the two-meter Hue Strip. I’ve had these strips for two weeks and have had zero issues. The colour output is great and they sync perfectly with my Hue Lights. As I said before, I’m sold. If you have any questions about these controllers drop a comment below and I’d be more than happy to answer them!

As an Amazon Associate, TechTrail earns from qualifying purchases made with some store links.

TechTrail use cookies on our site to give a more relevant experience as well as for analytical purposes. By clicking ACCEPT, you consent to the use of cookies on this site.
Cookie settingsACCEPT
Manage consent

TechTrail uses cookies to improve your experience while you navigate through the website. Out of these, the cookies that are categorized as necessary are stored on your browser as they are essential for the working of basic functionalities of the website. We also use third-party cookies that help us analyse and understand how you use this website. These cookies will be stored in your browser only with your consent. You also have the option to opt-out of these cookies. But opting out of some of these cookies may affect your browsing experience.
Necessary Always Enabled

Any cookies not necessary for the website to function which are used specifically to collect user data via analytics other embedded contents are termed as non-necessary cookies. These are not required for the site to function and can be turned off without affecting your viewing experience.